Our monthly round up of anything we’re doing and learning in our own time.

Frontend Developer
“I’ve recently been looking into a few areas around developing REST API’s within Node, especially around creating service tests in JavaScript (we currently use Behat – PHP in our projects). It allows for a really fast feedback loop and I found it a really natural progression as it predominantly uses technologies that we use daily at UVD, namely Mocha and chai, with a library called supertest.

I wanted to get in early with this, but I’ve been watching Making A Murderer, which is a Netflix docu-drama. It’s about a guy in USA –  I won’t give away any spoilers, but the first episode gives a bit of history about him and how he was sent to jail for something he didn’t do. The rest of the series follows a big conspiracy over another murder and it’s a big did he / didn’t he. It’s really addictive!”

Marketing
“Last time I talked about having just finished reading ‘Finding George Orwell in Burma’. Since then, I was kindly bought ‘The Fatherland’ for Christmas, which is surprisingly similar. It’s set in Germany in the 60’s, but the Germans won the war and Hitler is still in power. The story follows March, an investigator working for the Kriminalpolizei who stumbles across a murder the top dogs don’t want him to investigate. The case leads him to uncover Germany’s biggest kept secret, which is what actually happened to the 8 million Jews that disappeared during the war. Obviously we know.. and it was strange that the day I finished the book was Holocaust Memorial Day.

Aside from that, I’ve been seeing more of, and reading about print design on the web, which is yummy. This led me to a lovely typography blog called TypeWolf, who tweeted an awesome article the other day: Why Designers Love The Ampersand. What’s best about the article is the brief history of the ampersand, which I never knew. It used to be the 27th letter of the alphabet, and stands for the latin word for ‘and’: et. When I draw an ‘and’ sign, I always draw a capital ‘e’ with a line through it – now I know why! Back in the day when it was the 27th letter, when reciting their ABCs children referred to it using ‘per se’, so “X Y Z and per se and”, which is where ‘ampersand’ comes from.”

Director
“I wanted to talk about the new Attenborough which was shown the other night about the newly discovered dinosaur; the titanosaur, which is the largest found to date. In the episode, he showed us one of it’s vertebrae, which was huge. Us humans have a little canal in ours which our nervous system runs through, and when he showed the hole on the dinosaur’s, it was huge. When we touch something, we can feel it instantly, but if the dinosaur was to touch something with its tail, it would take a second for it to notice as the nerve signals have so far to travel to the brain.

In terms of work, we’ve been using Kanban for nearly a year now, and it’s great for our development workflow, but it doesn’t really help us to visualise the product roadmap or upcoming priorities which can be quite an opaque process to some team members. After some digging around, I’ve found The Volcano and The Arrow. They’re basically a simple representation of potential work coming up, enabling stories to be funnelled through levels of prioritisation. Turned on it’s side, the output from the volcano, can flow nicely into the Kanban board for our development.” 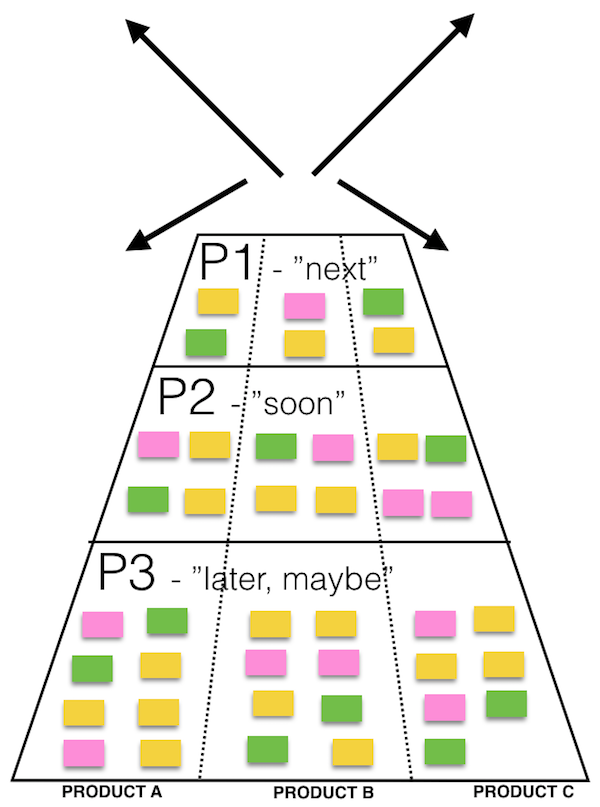 Developer
“I’ve been using command bus a lot lately, and am writing a blog post about that later in the month.

Using Matthias Noback’s command bus library, I came across the Decorator design pattern. The Decorator design pattern is described as dynamically adding additional responsibilities to an object without interfering with the interface. I found an ebook, ‘Design Patterns Explained Simply’ which had a good article on their website: https://sourcemaking.com/design_patterns/decorator. I’ve also been using Martin Fowler’s book ‘Patterns of Enterprise Application Architecture’ for reference.

Another cool thing is that we’re upgrading to PHP7, which will improve the speed and give us some much needed new features, like return types in Limpid Markets. We’ve started setting up our development VM now and we should be ready to test in a few weeks.”

Lead Developer
“I often find that I have 6 month enthusiasm cycles for learning new technologies and languages and I’m definitely riding one at the moment! Starting with Redux I’ve ended up diving deep into functional programming, attempting to learn Elm, Elixir and even dip my toes into the world of Haskell. I’m increasingly finding that the functional techniques I’m learning are improving the object-oriented code I’m writing for work, which is a great added bonus. So far I’ve found Elm to be most enjoyable out of the 3; it’s a pure, statically typed language that compiles to JavaScript. The type system and compiler are so good that it totally eliminated run-time exceptions from my frontend code. I’m trying to develop an application using the PEE (Phoenix, Elixir, Elm) stack right now and I’m finding that my enthusiasm for programming is sky-rocketing.”

Senior Frontend Developer
“I’ve started listening to a great podcast called ‘You Are Not So Smart’ which is about self delusion, social behaviour and psychology. I recently listened to a particularly interesting episode on the subject of survivorship bias. The set up for explaining this bias was centred around a group of mathematicians in WW2 charged with solving complex mathematical ‘war problems’, such as the shooting patterns of submarines. The survivorship bias was introduced when the US army were trying to assess the best areas to armour their air craft as it had become increasingly important to keep them airborne. They couldn’t reinforce the whole aicraft with armour, so needed to find key points in the structure to protect. When they looked at the planes that had survived battle, they observed where had the most bullet holes, which was the wings and fuselage, so obviously wanted to protect these parts. A key member of the applied mathematics panel, Abraham Wald, disagreed with this decision immediately, claiming an error in judgement. Put simply, these planes survived battle in spite of being hit in those areas, so reinforcing these areas would be a waste of time. Counter intiuatively re-inforcing the areas the surviving planes weren’t hit was the way to go.

Survivorship bias thus is simply looking at the success stories, or ‘survivors’, when making a decision. In reality, looking at the failures can often be a more informative and balanced way of building an opinion or decision. So to takeaway, it’s not always best to seek out successful people to ask for advice – speak to the people who’ve failed and learn from their mistakes. For as the host David McRaney summarises, success can boil down to “serially avoiding catastrophic failure while routinely absorbing manageable damage”.”